Light emitting diode (LED): a semiconductor light source that emits light when an electrical current passes through it. They need direct current (DC) to operate, usually via an LED driver. [source]

LED driver: an electrical device that changes alternating current (AC) power from the electrical grid/your wall outlet into a regulated DC current that the LED’s can use. It can often include a dimmer too. [source]

Electromagnetic spectrum: a range of frequencies of electromagnetic radiation with respective wavelengths. Different types of electromagnetic radiation (e.g. radio waves, microwaves, gamma rays, etc) have different wavelengths and frequencies. Radio waves travel much slower, thus have longer wavelengths and travel at lower frequencies. This is because wavelength and frequency is inversely proportional (i.e. f = c/wavelength). If wavelength is a big value, the frequency must be a small value. One radio wave from peak to peak is roughly 20% taller than the tallest skyscraper in the world. For LED grow lights, the important spectrum is between infrared and ultraviolet on the image below. [2]

Radiant flux: Also known as radiant power, it is a measure of the perceived energy transfer per unit time (i.e. power) of a light source. Basically the amount of energy a light produces per second.  E.g. for the sun, this would also include UV and IR light, which is outside the PAR range. SI Units: Watt [W]

Integrating sphere (i.e. Ulbricht sphere): A hollow sphere with white reflective coating on the inside. Small commercial spheres can cost thousands of dollars. This is why many grow light manufacturers do not have one for measuring luminous flux of their grow lights. [source]

Photosynthetically active radiation (PAR): is the spectral range from 400-700 nm that photosynthetic organisms (e.g. plants) use during photosynthesis. The light intensity within this range is measured. PAR is not a measurement unit. It is just a definition for the type of light required for photosynthesis. PPFD is the measurement for PAR (defined below). [source1] SI Units: Watts/meter squared [W/m2] (irradiance (i.e. radiant flux/power) of PAR)

A PAR chart gives the PPF values for a specified grow area. This can often be 2×2 ft (61×61 cm), 3×3 ft (91×91 cm) or 4×4 ft (122×122 cm), standard grow tent measurements. As can be seen from the first image above, the recommendation is for a 4×4 ft (120×120 cm) grow tent. The light is located dead center in the chart, either 18 or 24 inches (46 or 61 cm) from the lamp to the floor (i.e. the grid). The middle values in the chart always show the biggest PPF values, seeing as the light is most intense there and travels the shortest distance to the floor/grid. As you get further away from the center point of the grid, the light intensity and therefore also the PPF decreases. Especially cheap lights can have really bad values at the outer edges of the chart. The PPF values also decrease as the light is raised from 18 inches to 24 inches.

Seeing as the PPF values are highest in the center, it is often a better idea to buy multiple small grow lights than one big grow light if you have the budget. That way, the PAR gets more evenly distributed to the plant canopy. Some companies that hype up their marketing with high PPF values only refer to the center values and do not take an average of the entire grow grid. This is most often the case with cheaper Chinese grow lights, but false marketing is a problem in the entire industry.

Photosynthetic photon flux density (PPFD): number of photons in the PAR range between 400-700 nm emited each second over a square meter area. In simpler terms, the amount of PAR that arrives on a plant every second. [source, source2] PPFD is a spot measurement of a specific location on the plant canopy. This value is often misused in marketing.

In the words of Fluence (by Osram), “Lighting companies that only publish the PPFD at the center point of a coverage area grossly overestimate the true light intensity of a fixture”. The PPFD right below the grow light tends to be strongest. The PPFD goes down the further away from the center of the grow light you get. See PAR chart for more info. Also, manufacturers can easily manipulate PPFD data. The manufacturer needs to specify the vertical and horizontal measurement distance from the grow light, the number of measurements included to get an average value, and min/max ratio. Ideally, an independent third party should make the PAR chart. Measurement units: [umol/m2/s] [source]

Higher values are better. [source] Some grow lights have a PE value of over two!

The PPFD and PE values are important values to consider when purchasing a grow light. All grow lights provide Watt values. However, if the PE is bad, the light is not good at converting electricity into useful PAR.

Let’s look at an example. The popular Vivarspectra 300W grow light. [source] Already from the title, it is clear they are lying. Going a bit further down in the description, and you can see the power draw is roughly 130W. That’s more than two times less than shown!

This is correct, so hats off to them for mentioning this.

Let’s calculate the PE next. Taking an average of the PAR chart in the right image above, I get an average of 115 umol/J. Dividing this by the 130 W power draw, we get 115/130= 0,8 umol/J. This is pretty good value for money, considering this light can often be found for under $100.

LED light spectrum: The two most important colors that plants use are blue and red. Blue light is very important during the vegetative growth stage (e.g. a chili pepper plant growing from a starter plant until it starts the bloom). Red light is then used during the blooming/flowering cycle (e.g. when a chili plant starts flowering and grows chili peppers).

White light contains a lot of green and yellow light, which is still efficient for plants to use. Plant leaves are green because they do not absorb as much green light as red and blue. This green light is reflected back to us. Green light that is not reflected penetrates the upper canopy. This leads to higher growth rates in the lower canopy with white light, increasing the entire plant growth rate and yield.

White vs blurple LEDs: White LEDs produce light in the entire color spectrum. Blurple, on the other hand, focus solely on the blue and red spectrums, which gives off a blue/purple light, i.e. blurple. Researchers have found that white light most often leads to higher yields and quicker growth rates than blue and red lights. White light can penetrate the canopy better and provide more light to the lower leaves, increasing the entire plant growth rate. 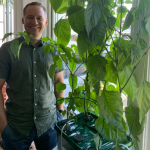 Bjorn Kvaale
Every since studying engineering, Bjorn has been interested in how technology can help grow plants quicker.

As an Amazon Associate, I earn from qualifying purchases.

Keep in mind that we may receive commissions when you click our links and make purchases. However, this does not impact our reviews and comparisons. We try our best to keep things fair and balanced, in order to help you make the best choice for you.